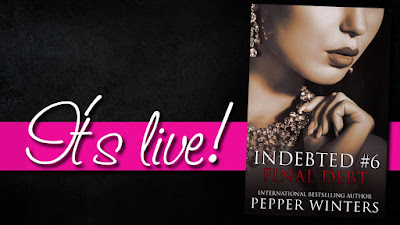 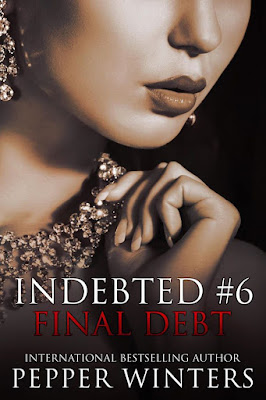 
Where love tries to triumph and darkness continues to reign....


"I'm in love with her, but it might not be enough to stop her from becoming the latest victim of the Debt Inheritance. I know who I am now. I know what I must do. We will be together--I just hope it's on Earth rather than in heaven."


It all comes down to this.


There is also a BONUS BOOK: Indebted Epilogue OUT NOW. 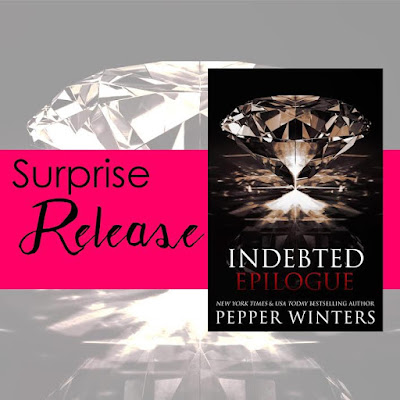 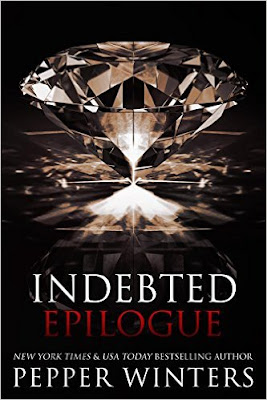 
Cut’s voice physically hurt me as he forced me to my knees. The ballroom splendour mocked me as I bowed unwillingly at the feet of my executioner.


Velvet and hand-stitched crewel on the walls glittered like the diamonds the Hawks smuggled—a direct contrast to the roughly sawn wood and crude craftsmanship of the guillotine dais. No finesse. No pride. Just a raised podium, framework cushioning a large tarnished blade, and a rope dangling to the side.


“Don’t do this. Cut…think about what you’ve become. You can stop this.” My voice mimicked a beg but I’d vowed not to beg. I’d seen things, understood things, and suffered things I never thought I would be able to endure. I refused to cry or grovel. I wouldn’t give him that satisfaction.


“In five minutes, this will all be over, Weaver.” Cut bent to the side and collected a wicker basket.


I didn’t want to think about what its contents would be.


He placed it on the other side of the wooden block.


“No. No more talking. Not after everything you’ve done.” Ripping a black hood from his pocket, he didn’t hesitate. No fanfare. No second guesses.


I cried out as the scratchy blackness engulfed my face, tightening by a cord around my throat.


The Weaver Wailer chilled me. The diamond collar that’d seen what I’d seen and whispered with phantoms of my slain family prepared to revoke its claim and detach from around my neck.


A heavy yoke settled over the top of my spine.


I closed my eyes.


I waited to die. 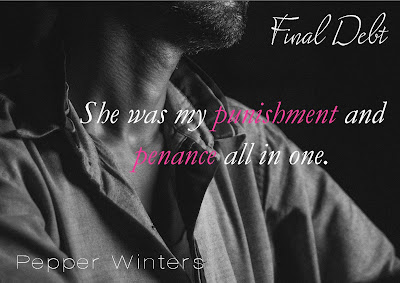 
I pushed back, gripping the handrails of the private jet, throwing my weight against Daniel’s incessant pushing. “Stop!”


“Get up the fucking stairs, Weaver.” Daniel jabbed his elbow into my spine.


I stumbled, bashing my knee against the high tread. “You can’t do this!” How had this happened? How had mere hours turned the entire universe against me? Again.


I wanted to smash every clock. Tear out the cog from every watch.


Time had once again stolen my life.


Daniel cackled. “I think you’ll find we can.” He shoved me higher.


My heart hurt—as if every mile between us and Hawksridge was a blade slicing me further from Jethro’s protection—a disharmony in an already discorded symphony.


One moment, I’d been love-bruised and adored, tiptoeing back into the Hall; the next, I was trapped, forced to dress in jeans and a hoodie, and obey Daniel as he lurked in my doorway, barking orders to pack a few meagre belongings.


He hadn’t left me alone.


His eyes followed my every move. I couldn’t grab the gun I’d hidden thanks to Jasmine. I couldn’t text Jethro to tell him I’d been caught. All I could do was run around my room with my lover’s release still damp on my inner thighs and submit to my nemesis.


The only saving grace was beneath Daniel’s hateful stare, I’d managed to pack the clothing I’d altered a few weeks ago. The cuffs full of needles and hems armoured with tools of my seamstress trade. Those garments were my only hope. There was no loophole. No way to refuse.


I had to trust Jasmine would get word to Jethro. That he would come for me…


Before it’s too late.


The desolation I’d suffered when Daniel first caught me faded to indignant anger. I’d been so close to being free. I’d been in Jethro’s arms. I’d been away from his psychotic family. My heart hardened a little toward Jethro for making me go back.


Why? Why did you send me back?


I didn’t know if I’d have the courage to forgive him.


You know why. And you will. Of course, you will.


I couldn’t hate him because I wasn’t selfish. He’d sent me back to protect all of us. Those precious few who’d accepted him and he’d accepted in return. Love was the worst enemy, winding its commitment, ensuring no freedom when it came to clearheaded thinking of adversity.


Jethro loved too much. Felt too much. Suffered too much. And his siblings would be our downfall. Kestrel and Jasmine relied on him—just like I did. The responsibility of settling his family’s wrongs was a terrible burden to bear.


But he’s not alone.


I might’ve been stolen. Jethro’s plans to save me might be ruined. But I was still alive. Still breathing. I wasn’t the naïve girl who’d first arrived at Hawksridge. I was a woman in love with a Hawk. A Weaver who would draw Hawk blood.


Pain exploded in my spine as Daniel stabbed me with his fist. “Get in the fucking airplane.”


“No!” I threw myself backward, looking frantically at the private hangar. We weren’t at Heathrow, but a small, private airfield called Turweston. “I won’t!”


No strangers I could call for help.


No police or air marshals.


When Daniel had stalked me from my room and shoved me outside, Cut had been waiting. With a victorious smile, he’d stuffed me in the back of a limousine.


With a purring engine, we’d pulled away from Hawksridge, tyres crunching on gravel as we followed the long driveway off the estate.


My eyes had scoured the trees, their silhouettes growing stronger as the sun tinted the sky with pink blushes. Daniel and Cut sat opposite me, toasting each other with a chilled bottle of champagne. However, I hadn’t been alone on my side of the limo—I had a guard.


Marquise, Bonnie’s damn henchman, sat beside me; a mountain of muscle, unyielding and impenetrable.


“Come along.” A strange voice raised my gaze.


A man in a captain’s uniform smiled from the top of the aircraft steps. The private plane’s fuselage glinted in graphite grey. Sparkling diamonds, inlaid in the shape of a windswept ribbon, decorated the tail.


Daniel laughed behind me. “Like you have a choice.”


“I always have a choice, Buzzard.” I glowered over my shoulder. “Just like this choice of yours will not end well for you.”


If I don’t kill you, Jethro will.


As far as Daniel knew, his slain brother was supposedly rotting in some unmarked grave. Jethro was right. The element of surprise trumped any of Cut and Daniel’s grand delusions.


He snarled, “Watch it, bitch. Everything you say to me here will be paid in full when we’re there.”


“Now, now. No need for threats.” The captain climbed down a rung, holding out his hand. “She’ll get on board. Won’t you, my dear? No need to be afraid of flying. I have an exemplary record.” White hair tufted from either side of his pristine flying cap. In his mid-fifties, he looked fit and toned and impatient to take off.


I can’t be so far from Jethro.


The captain smiled, waving at his vessel. “Of course, you can. Plus, I bet you’ve never travelled in such style.”


“It’s nothing against your mode of transport. It’s the destination I disagree to. I’m staying here.” I dug my heels into the metal grate, fighting against Daniel’s perpetual pushing. “I don’t have my passport, visa… I can’t travel across borders, so you might as well let me return home.”


Had Hawksridge Hall become my home?


But Jethro had. It didn’t matter where we ended up. What we did for work. How our lives panned out. As long as I was alive with Jethro by my side…I would be home.


“Don’t fuss about that.” The captain waved his hand in invitation. “Travel is good for the soul.”


Travel meant my soul would become untethered from my body, thanks to Cut and the Final Debt.


The sun barely peeked over the horizon, hidden by soupy fog and reluctant night. The world refused to warm, unable to shed the morning frost or dislodge the claws of winter. England didn’t want to say goodbye as much as I did, its reluctant dawn wanting me to stay.


“If you don’t get on the motherfucking plane in two seconds, Weaver, you’ll live to regret it,” Daniel growled.


I glared at the youngest Hawk. “Haven’t you learned by now your threats don’t scare me?”


Forcing myself to stand taller, I hid the quaking in my bones, the quivering in muscles, the rampant terror scurrying in my blood. “I know where you want to take me, and I refuse.”


Daniel pinched the bridge of his nose. A second later, he cuffed me on the back of the head. “Behave!”


I gritted my teeth against the wash of agony.


“Almasi Kipanga is a fucking treat for the likes of you, Weaver. Get on your knees and show some goddamn appreciation. Otherwise, I’ll rip out your fucking tongue and ensure peace for the rest of the trip.”


“Ah, as I said, there’s no need for violence.” The captain took another step, prying my hand off the railing and tugging me upward. “Come along, my dear. Let’s get you inside. And don’t you worry about visas and things. Leave it to me. Airport control won’t be an issue.”


Vertigo cast the world in monochromatic greys as I swayed toward the captain. “But—”


Cut barrelled past Daniel—reaching the end of his patience. Grabbing my arse, he shoved me upward, forcing me like unwilling livestock up the final steps. “I have your passport, Nila. Get on the plane.” His breath skated over the back of my neck. “And don’t think about refusing again. Got it?”


Gripping the fuselage, I looked over my shoulder. “My passport? How did you—”


He waved a black binder in my face. “Everything is in here. You have no more excuses, and I won’t ask again. Get on the fucking plane or I’ll knock you out and you can wake up when we get there.” 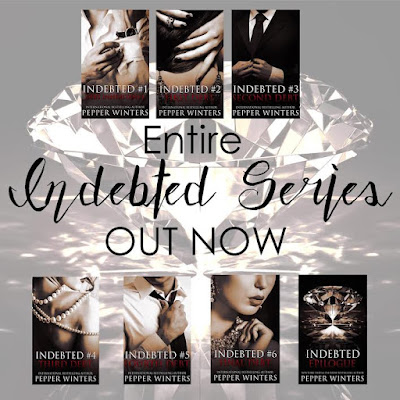 Pepper Winters wears many roles. Some of them include writer, reader, sometimes wife. She loves dark, taboo stories that twist with your head. The more tortured the hero, the better, and she constantly thinks up ways to break and fix her characters. Oh, and sex... her books have sex.


She loves to travel and has an amazing, fabulous hubby who puts up with her love affair with her book boyfriends.

Her Dark Erotica books include:


Tears of Tess (Monsters in the Dark #1)


Quintessentially Q (Monsters in the Dark #2)


Her Grey Romance books include: