Showing posts from May, 2016
Show all

***RELEASE BLITZ*** Hold You Against Me by Skye Warren

Title: H old You Against Me Series: Stripped  Author: Skye Warren Genre: Contemporary Romance Release Date: May 31 , 201 6 Blurb From New York Times bestselling author Skye Warren comes a sexy new novel in the Stripped series… Once upon a time the daughter of a mafia king fell in love with a foot soldier. This fairy tale didn't have a happy ending. My sister and I barely managed to escape alive, and we've lived in relative hiding ever since. I'm safe now, but I can never forget the boy who gave his life to save mine. Except there's a chance that he's still alive. And he's fighting a war. Even knowing the risks, I have to find him. I have to find some way to protect him, the way he protected me. But he isn't the boy I left behind. He's a violent man. A criminal. And he's been waiting for me--the final pawn in a dark game of survival and love. ADD TO GOODREADS Purchase Links
Post a Comment
Read more

Title: Speechless Series: Pier 70 #3 Author: Nicole Edwards Genre: Adult, M/M Romance Coming: June 7, 2016 He’s suffering in silence... Teague Carter, one of the four owners of Pier 70 Marina, has spent his life feeling rejected. To the point that he has never allowed himself to get close to anyone. He prefers it that way, in fact. But he refuses to believe that his destructive behavior might be something more than rebellion. He’s unable to speak... Hudson Ballard, Pier 70’s mechanic, has been fighting his attraction to Teague for years. He has stood by and watched the kid get more and more out of control, but this time is the last. If Teague wants to use sex to escape his problems, Hudson is certainly willing to be the one to show him that he’s good with more than just his hands. Sometimes words aren’t necessary. There are fireworks when this out-of-control bad boy agrees to no strings with this tatted up, dominating mechanic. Can Teague
Post a Comment
Read more 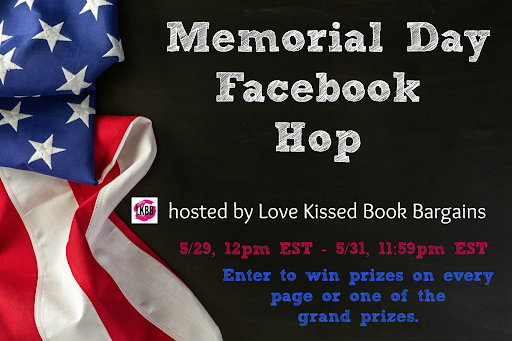 Welcome to the Memorial Day Facebook Hop, hosted by Love Kissed Book Bargains! With tons of prizes from almost 100 authors and bloggers, including Amazon gift cards, it's a great way to spend Memorial Day! Don't miss out! Visit one, or all to participate. Easy entries. Meet some new authors! Discover some awesome blogs. Most of all...have fun! The Memorial Day Hop starts here:  https://www.facebook.com/ramblingsfromseks/?pnref=lhc
Post a Comment
Read more

Title : Three Author: S.C. Daiko Gernre: Erotic Romance  I shouldn’t want this, shouldn’t want them, and I definitely shouldn’t want all the dirty things they do  –  not just to me but to each other. Except I do want it. I want it so bad I can’t keep my head straight. Why does dirty have to feel so damn good? It’s lust, simple as that. No strings, just two guys, a girl and a whole lot of filth. I can handle that. Sure I can. No big deal… it’s not like I’m going to fall for them or anything, right? *** Sexy Italian Max has had the starring role in some hot dreams and wild nights for Lauren. Now she will be living with him, leaving her life in Seattle behind while she works for his company in Rome, Italy. There she meets gorgeous Englishman Steve, who is also rooming at Max’s villa. Soon crazy ideas start to form in Lauren’s mind about having both men in her bed. When Lauren’s fantasy becomes reality, the two sex gods take her to heights
Post a Comment
Read more

Ten submissive women. One billionaire dominant. Three months competing for his “affections.” One winner takes all. NOW LIVE!   Amazon US:   http://amzn.to/27ep4G0 Amazon UK: http://amzn.to/1ZG6Oje iBooks: http://apple.co/1XlE28Y Nook: http://bit.ly/1TBc2IW Kobo: http://bit.ly/27hamhJ Blurb Dominic Reed, heir to an oil fortune, has spent his entire adult life perfecting his dark hobby. With little control in every other area of his manicured life, he finds his release as a dominant. With more money than he knows what to do with, he creates a TV show: The Dom Games. This year is different than the past seasons, this year Dominic will be the star. He wants a forever submissive. Before last month Kayla Parchet thought the word submissive only referred to dogs. Fresh out of college with a business degree that is scrap paper, she needs to get an Ivy League masters degree to pursue her dreams. When Kayla is accepted to be one of the ten, her world ta
Post a Comment
Read more
More posts