BLURB
My planned trip for two unexpectedly turned into a trip for one. Rather than let
my breakup get me down, I packed my bags and decided a week at a luxury
resort was just what I needed.
But one calamity after the next, and suddenly I was stuck without a hotel room,
along with a few hundred other people.
It looked like my fancy vacation was about to turn into me sleeping on the hotel
lobby floor.
Until I overheard a gorgeous man pretending to be someone he wasn’t in order
to steal a reservation from a guest who hadn’t shown up yet.
When I realized there were two rooms, instead of calling him out, I pretended to
be his sister. That’s how the story of “Milo and Maddie Hooker” began.
We were the Hookers.
My depressing trip quickly made a U-turn into an adventure.
My fake brother spent the next few days showing me around his hometown.
When it was time to leave, neither of us really wanted to go yet.
So, instead of flying back to our respective homes, we ventured on a road trip.
At every stop, we’d pick up souvenirs.
But as hot as our chemistry was, we never crossed the line.
Milo knew I’d just come out of a tough relationship and didn’t want to mess with
a vulnerable woman.
So instead, at the end of our trip, we made a pact to meet again in three
months.
It was always my intention to meet him.
But when I got back home, reality hit in a big way.
And I worried I may have lost my handsome stranger forever.
Was there a place for him in my future?
Or had the memory of him just become my favorite souvenir? She grew up in Boston with five older brothers and spent most of her twenties as
a television news anchor. Penelope resides in Rhode Island with her husband, son,
and beautiful daughter with autism.

With over two million books sold, she is a 21-time New York Times bestseller and
the author of over twenty novels. Her books have been translated into over a
dozen languages and can be found in bookstores around the world.

Vi Keeland is a #1 New York Times, #1 Wall Street Journal, and USA
Today Bestselling author. With millions of books sold, her titles have appeared in
over a hundred Bestseller lists and are currently translated in twenty-five
languages. She resides in New York with her husband and their three children
where she is living out her own happily ever after with the boy she met at age six.

OTHER BOOKS BY PENELOPE WARD AND VI KEELAND:: 
OTHER BOOKS BY PENELOPE WARD:: 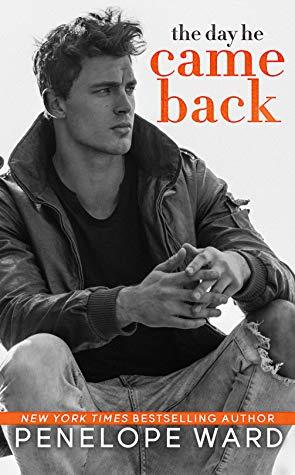 
OTHER BOOKS BY VI KEELAND:: SYNOPSIS
The beginning of my sophomore year in college was off to a rough start.
On the first day of orientation, I had an altercation with an infuriating British dude in a campus bathroom.
(The ladies’ room was out of order. So, I used the men’s room. Don’t judge.)
I got home later that night and realized that the foreign student we were expecting to rent a room in my parents’ house was allergic to our cat.
So, the spare room went to someone else: Caleb—the British guy from the men’s room.
And so it began…my love-hate story with Caleb Yates. Or was it hate-love in that order?

The guy knew how to push every one of my buttons.
Sometimes I’d email him to express my aggravation and disdain.
He’d actually rewrite my own words and send them back to me.
That was the type of infuriating person Caleb was.
So frustrating.
And…
Sometimes incredibly funny and endearingly sweet.
And hot.

He eventually grew on me, and Caleb soon became one of my best friends that year.
TToo bad he was headed back to England soon, so nothing could happen between us—for so many reasons.
I definitely couldn't fall in love with him, especially since all we had was just one year.

She grew up in Boston with five older brothers and spent most of her twenties as a television news anchor. Penelope resides in Rhode Island with her husband, son, and beautiful daughter with autism.

With over two million books sold, she is a 21-time New York Times bestseller and the author of over twenty novels. Her books have been translated into over a dozen languages and can be found in bookstores around the world.

Check out this stunning cover for GIA (Tied in Steel 3) by MJ Fields! We hope you can join us! 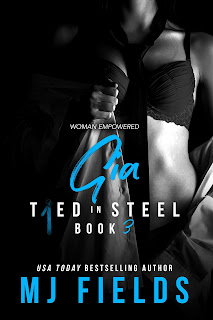 He was handsome and from a good southern family.
I was beautiful and didn’t know my real family.

He was strong and self-confident.
I was broken and never knew confidence.

He told me I would be his queen
Then, three years later, he stripped me of my crown.

Six months into our marriage, I “fell down the stairs” and broke my arm.
At the hospital, I found out I was pregnant.

One year later, I “ran into a door” and hid my black eye behind designer sunglasses and a fake smile.

A year after that, pregnant with our second child, we went to meet some of his old college friends in New York City. I took too long to get ready. He told them I had the stomach bug.

Nine years ago, I was an eighteen-year-old girl, married to her high school sweetheart turned tormentor.

That fateful night in New York City, a cycle was broken. Now, I am empowered …

but only for six weeks out of the year. 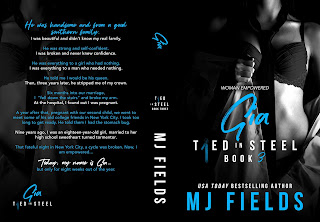 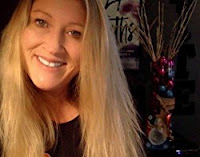 USA Today bestselling author MJ Fields write books that scorch pages and melt hearts.
Her style is raw, gritty and authentic.
Love an alpha and a strong heroine? She does too.