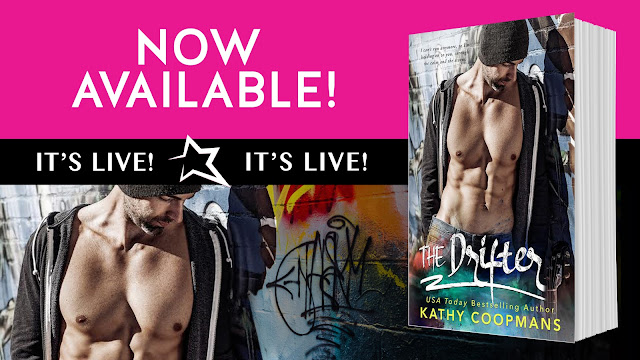 Are you ready for Kray Brooks?

The Drifter by Kathy Coopmans is 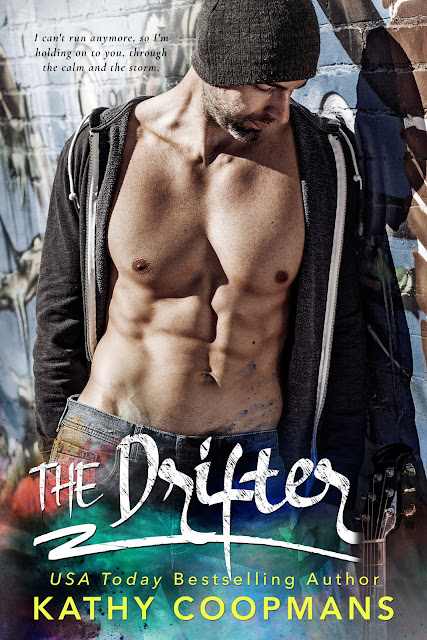 To the outside world, Kray Brooks had it all growing up.
Wealth. The devoting parents.
The beautiful girlfriend.
Good grades.

All of it a lie, except her. The woman he left behind thirteen years ago to try and achieve his real dream... to become a musician.

Life doesn't always go according to the plan you set out for yourself.
Sometimes, you drift. Become lost, lose hope and crash.

For thirteen years he's been drifting wherever his guitar takes him, avoiding his past. Never thinking of his future.
Not once did he think it would all catch up to him. Until it did. 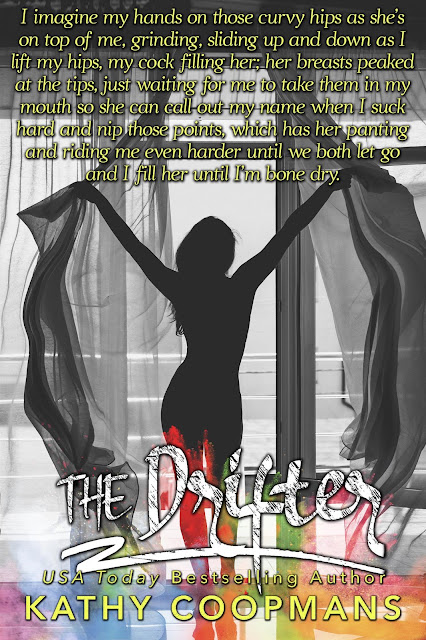 Excerpt
“You in there or what?” Josh nudges me with his hip. His finger rises up to tap me on my temple, startling me out of my slumber. I stumble forward, damn near tripping over a guitar case that’s sitting on the edge of the sidewalk. I should be paying attention to where I’m going. There are many people here singing and offering up some sort of trick for money up and down this strip. Only the ones who can carry a tune catch my wandering eye for more than a second. Not that they all don’t deserve my attention, but the people who sing have a raw, natural talent. I become lost in their voices. Attuned. Familiar. There’s no sweet, tender, or rough and seductive voice close by. Therefore, whoever owns this particular case isn’t singing, or otherwise I may have pulled Josh to a sudden stop to listen before tumbling over it like an idiot. “Shit. Sorry about that,” I tell the man I notice standing up against the brick wall without looking at him. This is what I get for thinking about things I shouldn’t. “It was my fault,” Josh comments as we both bend down to shove the few dollar bills that fell out back into the case. The man behind us just mumbles something incoherent. I instantly feel worse for some reason. He’s worked hard for this money. In the heat no less. And here I am, scrounging around to make sure I gather it all up while assholes walk around me not giving a shit there are two people squatted down on the sidewalk. They just step around us, not bothering to offer help. Insensitive assholes. I reach into my purse and toss a hundred-dollar bill inside the case. I know most of these people spend their money on booze and drugs. I don’t care. Well, I do, really. They should be using it wisely. But who am I to judge? I only wish I could have heard him sing before we walk away. The talent they have is remarkable. It’s sad, really, how I enjoy listening to them sing on these streets for food, a home, or more than likely a fix of alcohol or drugs. I can’t help it; those voices carry me away. Some of them are truly mesmerizing. Wasted talent on a dirty street. I’m sure some are runaways with dreams shattered and hopes burned. This is the only way they know how to survive. The Hollywood record producers should listen to some of these talented people instead of shoving their lying butts into the faces of the fake boob Barbie to either get in her pants or rake her back over hot coals, sucking as much money out of her as they can. If only the rich would seek out the poor. To lend a hand to those who only think life has fed them nothing but shit. For these people to see that no matter how bad your life has been, if given the chance or a choice, you can become whoever you want to be, even if you’re alone doing it. I turn to the man whose face is darkened by the way he stands. His face is completely out of my sight with his chin tugged down to where it’s almost touching his chest. One black, shiny-booted foot rests up against the wall. His jeans hang low. He’s wearing a faded gray t-shirt that, if I’m correct, was black at one time. It also looks way too small, because my god, is it tight across his massive chest. He has shoulders any woman would love to reach around and grab as he lies on top of her. I’d give anything to see his face. To hear him sing. To observe and dissect his talent. 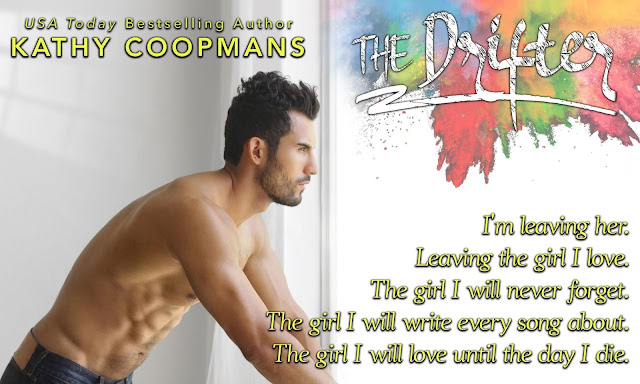 USA Today Best-Selling Author Kathy Coopmans, lives in Michigan with her husband Tony where they have two grown sons.
After raising her children she decided to publish her first book and retiring from being a hairstylist.
She now writes full time.
She's a huge sports fan with her favorite being Football and Tennis.
She's a giver and will do anything she can to help another person succeed!

Use whichever one of these you would like babe.