***BLOG TOUR & EXCERPT*** Stolen by the Laird by Eliza Knight 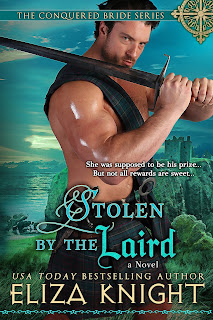 She was supposed to be his prize... But not all rewards are sweet...
Laird Brody Keith, Marischal of Scotland, has been asked by his future king to travel with William Wallace to Dunnottar Castle, where they will seize the castle back from the English. If he completes his mission, the castle, the land and all it holds, will be his. Brody is more than eager to sink his blade into the hearts of his enemies after the brutal murder of his sister and father. But what he doesn't count on is finding an English lass in need of his protection...
Lady Guinevere has led a less than pleasant life in Scotland over the past year, and now she can either run for her life or accept the proposal of a man who should be her enemy. Survival bids her to acquiesce, but that doesn't mean she has to play nice. Except, she's coming to adore the people whom she's always been told she should hate, and respect the man who risked his life for her.
Joined for a mutual purpose, Brody and Guinevere seem doomed from the start, but as time passes and their true enemies draw closer, they'll form an alliance that not even the devil himself can break.

Brody pushed the door open the remainder of the way and came face to face with four Englishwomen. They huddled by the window, dressed in Sassenach gowns, hair once styled as though they were attending a great feast, jewels at their necks, and tears adorning each face except for one.
“Och, but I’ve died and gone to Hell,” he muttered.
Everyone knew Englishwomen were as shrewish as… well as, an Englishwoman, and as cold as dead fish.
All four stared at him, wide-eyed, mouths hung agape.
Much like fish, he thought.
They were pretty enough, especially the one with the long flowing blonde locks. Though it looked as though her locks had seen better days, perhaps not to have been torn from whatever fancy knot they’d been in.
“Who are ye?” he asked in not too kind a tone. He didn’t want any shrewish behavior, simply facts.
The blonde stepped forward, squared her shoulders and looked him straight in the eye with her piercing blue—nay more green than blue—eyes. She was the only one who didn’t cry. As though she’d been expecting him. The lass was beautiful, even if she was a harpy. Her bone structure was delicate, but her eyes sharp, and the way she frowned, well, he guessed her tongue to be just as barbed. The gown accentuated the curve of her hips and the swell of marginal breasts—he refused to call them the perfect size, for she was English, and he denied finding anything about her to be flawless.
“Who are you?” she retorted.
Och, a fiery little fish. “I asked ye first.”
“Well”—her gaze roved from the top of his head down to his boot tips and he felt more than a little assessed—“I think it is plain to see I outrank you, savage, so you must answer me first.”
At her bold words the ladies in her presence all paled, one covered her mouth, another pinched her own arms and the third nodded approval.
Brody chuckled, taking a menacing step forward. “Then I suppose we have found ourselves at an impasse, fishy, for I do believe I outrank ye.”
“Fishy? Ye insult me.” She shook her head and regarded him with something akin to disgust. “Impossible.”
Her revulsion almost had him checking himself. How odd, and why should he even wonder at her manners? She was English after all. Every woman he’d ever met up to this point had fallen at his feet. Brody was known for his charismatic tongue, his lovemaking abilities. Well, this fish wouldn’t know those things. And from the looks of her, she’d be too uptight to enjoy the pleasures he could have given her, if he wanted to, which he wouldn’t.
Brody puffed his chest and took several steps forward. “I assure ye, madam, given your current situation, anything is possible.”
Two of her ladies fainted dead away and the third stepped in front of the blonde, only to be shoved behind, a sharp word from the Grande Fishy’s mouth.
Then she turned back to him, pursing her lips as though she were contemplating a truce.
Before she could speak, he cut her off. “I dinna make deals, lass. If ye dinna believe me, then take a look out your window at the kirk yonder.”
“So you intend to kill us then?” Despite the stubborn set to her jaw and shoulders, her lower lip quivered.
Och, but why did that slight tremble have to tug at his heart? “We shall see what comes to pass.” 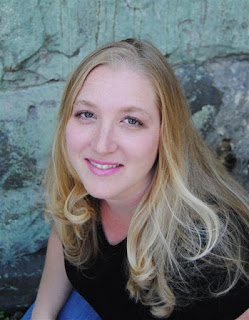