RELEASE BOOST
Title: Waiting For Tuesday
Author: Taylor Sullivan
Book 2 in The Suspicious Hearts Series
(can be read as a standalone) 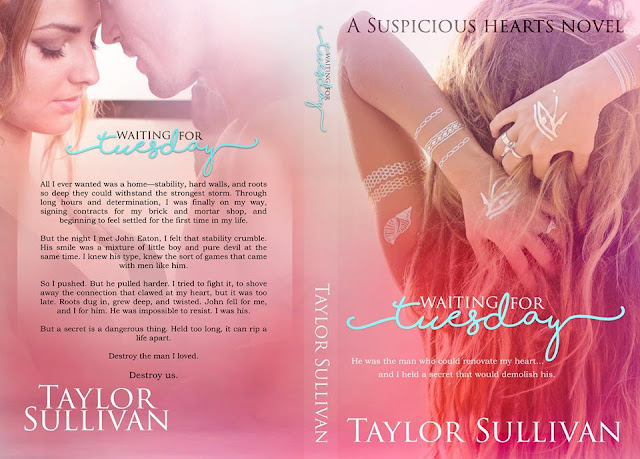 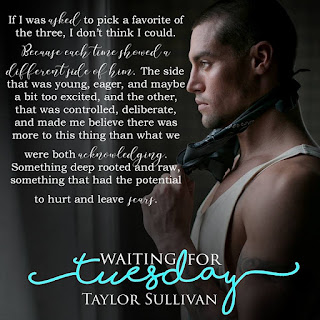 Blurb:
All I ever wanted was a home- stability, hard walls, and roots so deep they could withstand the strongest storm. Through long hours and determination, I was finally on my way, signing contracts for my brick and mortar shop, and beginning to feel settled for the first time in my life.
But the night I met John Eaton I felt that stability crumble. His smile was a mixture of little boy and pure devil at the same time. Handsome and charming, I knew his type, knew the sort of games that came with men like him.
So I pushed. But he pulled harder. I tried to fight it, to shove away the connection that clawed at my heart, but it was too late. Roots dug in, grew deep, and twisted. John fell for me, and I for him. He was impossible to resist. I was his.
But a secret is a dangerous thing. Held too long, it can rip a life apart.
Destroy the man I loved.
Destroy us.

ALSO PICK UP BOOK 1 IN THE SERIES!!!
HOME TO YOU 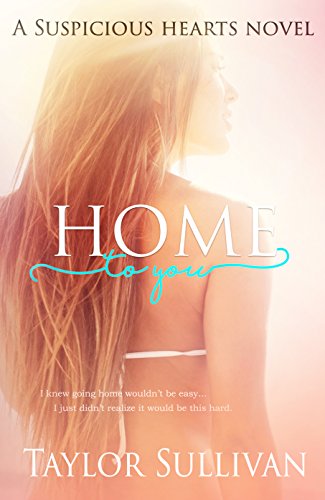 Blurb:
I didn’t want to love Jake Johnson.
He was the boy I fell in love with, my brother’s best friend, the man who took my heart. But sometimes love doesn’t listen. Sometimes your heart makes its own choices, pushes boundaries, and picks the exact wrong moment to show its vulnerable head.
The night we first kissed was my slap back to reality. The moment I realized he would never see me as more than a little sister. I did the only thing I could think of that would insure it never happened again. I moved away.
Now three years later, faced with a betrayal that pushes me to my limits, I'm thrown back into the arms of the man I'd sworn I left for good. The one who'd seen me through everything.
They say time heals, but not when you press pause. I knew returning home wouldn't be easy, I just didn't realize it would be this hard

About the Author:
Taylor is a contemporary romance author who loves writing stories about real people. Ones with hopes, dreams, fears, insecurities, and flaws. She loves to read as much as she loves to write, and is trilled to share her stories with you. When Taylor isn’t writing, she can often be found with her nose in a book, her face behind a camera, or spending time with her husband and three young children.
Taylor would love to hear from you.
Website: TaylorSullivanAuthor.com Email: TaylorSulliavan.Author@gmail.com Facebook: https://www.facebook.com/pages/Taylor-Sullivan-Author Twitter: https://twitter.com/@AuthorTSullivan