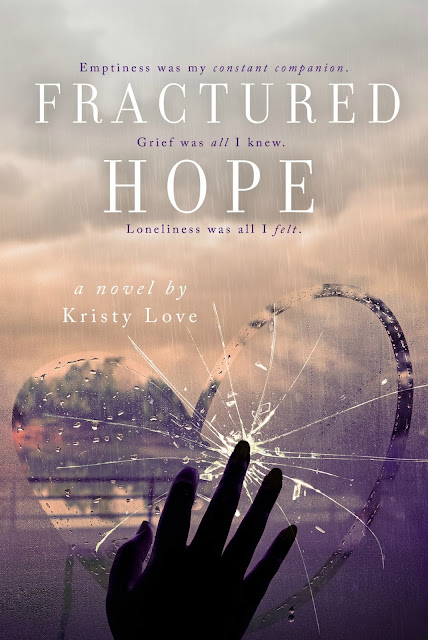 Emptiness was my constant companion.
Grief was all I knew. Loneliness was all I felt.
Life beat me down. The punches kept coming.
I existed. Didn’t really live.

Then he came into my life.
Roman.
He was like a battering ram with a silver tongue.
But for the first time in so long, I felt something.
I felt everything.
Peace.
Cared for.
Hope.

But hope led only to disappointment.

Loss.
Simple. Complicated. Life Altering.
I lived alone, consumed by everything I no longer possessed.
I had nothing to live for.

Mia woke something inside me I thought died long ago.
There was finally someone to share my life.
This was a dream I’d relinquished long ago.
She stirred emotion that I tried to fight,
But I wanted her.
Needed her.
I felt I had something to live for.

But hope was a liability I couldn’t afford. 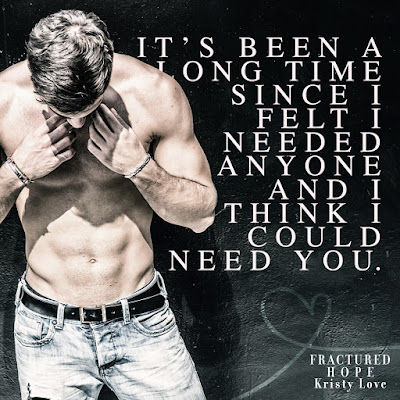 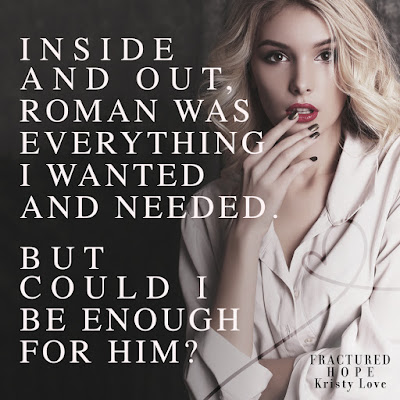 “Roman!” Mia squealed. She jumped out of the way as flour exploded out of the mixer and all over the counters, floor, and cabinets. “You can’t just dump flour into the mixer! You have to go slow about it.” She bumped me out of the way with her hip, measured out more flour, then poured it into the mixer. She put a little bit at a time before pouring more in. It was a slow process, but the look on her face . . . I loved how focused she was. There was a tiny crease between her eyebrows and her tongue stuck out of the corner of her mouth just a little bit. Just enough to make me crave leaning closer to taste her.

I pushed that thought away quickly. “I’m not a master baker like you are.” I smirked at her and her cheeks flushed. Knowing she reacted to me, no matter how small, gave me a rush. It made me feel things I hadn’t felt in years. I forgot how good it felt to be around a woman and enjoy her company.

I also forgot how much blue balls fucking sucked.

Mia turned the mixer off. “You don’t want to put the chips in with the mixer going. You want to fold them in.”

“You can fold dough?”

She nodded, never taking her eyes off what she was doing. She was meticulous about every step of the process. From the measuring of the ingredients to how and when they were added. She was in a zone and it turned me on. Watching her with her red apron on made me want to lift her onto the counter and taste the cookie dough off her lips. She said she wanted my help, but all I’d done is fuck up with the flour. “You can. Watch.” She grabbed a spatula and mixed the dough. I had no idea what she was doing that was any different than what she did before, but I didn’t question her. She knew what she was doing.

She had a little flour in her hair and a bit of her ponytail escaped and hung over her forehead as she worked. She made me ache. My arms ached to grab her close. My lips ached to taste her. My body ached to possess her. These feelings had been growing steadily over the last few weeks. As she opened up more and more to me, it got worse. I understood why she was so closed off and seeming to not live. I understood her sadness, her detachment from life. I understood her. I knew what it was like to lose your hope, your future, your everything.

“Perfect,” she muttered to herself. She doled out dough with a little scooper that looked like the smallest ice cream server I’d ever seen. She dropped each blob onto a cookie sheet, quickly and efficiently and I couldn’t take my eyes off her. My chest hurt watching her, so I rubbed it softly. Once she put the sheet into the oven, she turned around and rested her hands on her hips, her smile radiant. “First batch is in the oven.” Her eyes fell down to my chest and she laughed, though she tried to suppress it. “Uh, Roman? You’re a mess.”

I looked down at my black shirt, though it hardly looked it now. Flour splotches made it look black and gray.

“You might want to go brush your shirt off . . . outside.” Mia moved as though she was about to walk around me, but she stopped when I gripped the bottom of my shirt. I whipped it over my head and balled it up.

Her eyes skated over my skin, from my eyes to my waistband. They studied every inch of me as her mouth moved slightly, like she was forming silent words, her eyes wide.

I’d rendered her speechless. I liked that. I liked the color creeping into her cheeks and the way her chest moved rapidly with every breath.

“I, uh.” She cleared her throat. “I have to get the next batch of cookies ready to go into the oven.” She ducked her head and walked around me. The air between us was heavy, full of anticipation, arousal, and desire. I watched her, wishing I was brave enough to reach out and take what I wanted.

And, damn it, I wanted her.

“No, nothing. I just don’t want to forget what I’m doing.” She looked back over her shoulder at me, her eyes lingering on my arms.

“Am I distracting you?” I tossed my shirt onto the floor by the back door and stepped closer to her, leaning my hip against the counter. Her bare arm brushed against me as she moved. She jumped and scrambled away. The side of my mouth twitched, fighting the smirk that wanted to break free.

“No, not at all.” She sidled a few inches away, but kept working. Mia’s eyes were focused firmly on the task at hand. I slid a bit closer until she bumped into me again. She braced her hands on the counter as though it took a great deal of effort from her to ignore me. She took a deep breath and let it out slowly.

“Mia?” I moved closer to her. This time our skin was touching, there wasn’t any space between us. I felt the goosebumps pop up on her arm as she stiffened. “Are you okay?” She nodded quickly, her breathing rapid. Her sweet scent wafted up, enticing me. I grabbed her shoulder and turned her toward me. Her eyes slowly met mine. “Are you sure?” She didn’t move. Her breath seemed to have stopped in her chest as she looked up at me, raw emotion in her eyes. In that moment, I knew she wanted me, too. I wasn’t alone in feeling this pull between us. I was done pretending and denying. I cupped her face in my hands, gazing into her eyes. She seemed so uncertain and so fragile. I wanted to hold her together and make her feel better. I wanted her to lean into me instead of away.

I wanted so damn much from her.

I moved even closer, dropping my face closer to hers as she looked up at me. Her hands went to my arms, holding me away or pulling me closer, neither of us knew. Closer still, I ran my nose along hers, waiting for her to make a move. She smelled faintly of sugar, vanilla, and butter and I couldn’t wait to see if she tasted like it, too.

Finally, I had enough. I melded my mouth to hers. It wasn’t an innocent peck, a testing of what was between us; it was immediately passionate. Her hands tightened on my arms and one of my hands moved into her hair. She tasted better than I imagined she would as our lips continued tasting and wanting. She tasted like the cookie dough we had just been making and something else, something sweet I couldn’t quite place my finger on, but I knew I was addicted. One taste would never be enough. She’d be my favorite flavor.

Mia whimpered, a small noise in the back of her throat. I grabbed her ass and pulled her hips flush with mine, letting her know exactly what she was doing to me. All the dinners and sweets we’d shared had filled her out so nicely. It fit in my hand and quickly became my second favorite part of her—after her lips. She clutched me closer. Her tongue swept over my lips and I felt as if my knees were about to buckle. It’d been so long—so long—since I had someone in my arms, someone’s lips pressing against my own. I couldn’t get enough. That it was Mia, my sweet, docile neighbor, the girl I thought had been walking toward death’s door a few short months ago, blew my mind.

Her hands moved everywhere. Over my arms, my chest, my abs. One hand fisted in my hair like she was holding me hostage, not letting me get away from her. Not this time and not ever.

I was surprisingly okay with that.

Just as my hand skimmed her back, the oven timer blared. Mia jerked away from me, her chest heaving and her eyes wide in surprise and disbelief. Her fingers trailed over her lips as she stared at me. The timer went off behind us, having broken our connection, but not completely severing it. We were still lost in each other. After a few more seconds, Mia shook her head.

“I have to get that.” She pointed over her shoulder to the oven, though her eyes never left mine. She smiled weakly before turning around and rushing to the oven. My heart pounded in my chest as I watched her move around the kitchen, preparing another batch of cookies for the oven. I knew, in that moment, a kiss wouldn’t be enough. I wanted more of Mia. I wanted her smiles, laughter, tears, and anger. I wanted all of it. Except I was in no position to accept it. I wasn’t worthy of her beauty, inside or out. As much as I craved more, I couldn’t do that to her. I couldn’t subject her to me.

I grabbed my shirt off the floor. “I just remembered, I have plans. I’ll catch you later, yeah?”

“Oh,” Mia said as she whirled around, a cookie sheet in her hand. “Sure, no problem. Thanks for the, um, help.” She smiled.

“Of course.” I left her house and shrugged into my shirt.

At home, I got in the shower, making sure it was sufficiently cold. Bracing my hands on the wall, I hung my head, chastising myself for being so weak. And pathetic. 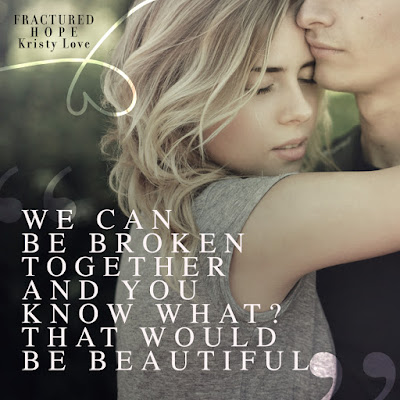 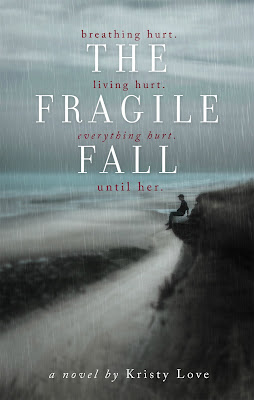 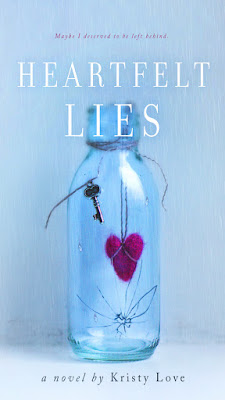 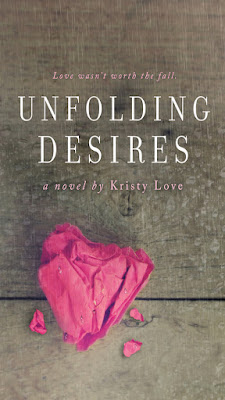 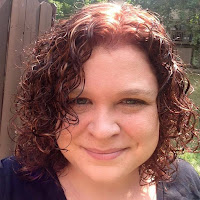 From the time she was old enough to form words into sentences, Kristy Love has been writing stories. She attended La Roche College and graduated with a Bachelor’s Degree in Professional Writing. When she’s not writing, Kristy can be found with her nose stuck in a book or spending time with her family and friends. She lives with her husband and two girls in Pittsburgh, Pennsylvania.