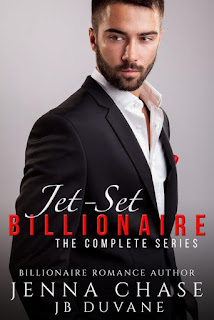 The Mile High Club is about to induct its newest member...
Recently single flight attendant Erica Blake finds herself caught between her pilot ex-boyfriend, Brad, and billionaire Malcolm McDaniel on an intercontinental jaunt on his private jet.
The young playboy is en route to Tokyo with a bevy of beauties, and it's up to Erica to remain professional even when he decides that the most gorgeous woman on the plane is her!
Malcolm is used to getting his way and won't take no for an answer. He'll do whatever it takes to convince Erica that he's the man she needs to move on from her ex.
But when the plane crashes on a tropical island and they must turn to each other for survival and comfort, ex-boyfriend Brad lets Erica know that he has no plans of letting her go.
This bundle includes all four parts of the steamy, romantic adventure series as well as a bonus epilogue that isn't available anywhere else. Jet-Set Billionaire: The Complete Series is a novel length book that totals 43k words and includes a HEA.

Check out Jet-Set Billionaire - The Complete Series on Goodreads
https://www.goodreads.com/book/show/31849996-jet-set-billionaire?from_search=true

Just a little bit closer, I thought as I leaned ever so slightly toward her. I didn’t want to come off as a creep and get that slap in the face I had thought about earlier, but I wanted to get closer to those lips and inhale that intoxicating scent of hers again.
Just then the plane hit an air pocket and teetered back and forth and I was by some act of God thrown forward so that my entire body was pressed into hers. My hands found their way around her waist and back as my chest was thrust against hers. My lips were hovering barely an inch from her own as the weight of both of our bodies rested against the counter.
I stared down into her eyes and breathed in her heavenly aroma. As her head fell back a bit I was compelled to move my face down to her neck, my lips just grazing the milky white skin. The air around me was filled with her scent and my head started to swim as I became intoxicated with her.
I didn’t know anything about this woman, I didn’t even know her name, but I did know that I would now stop at nothing to have her. She had invaded me somehow and I was helpless to resist her.
I brushed my lips along her neck as I moved them up toward hers and as I did I pulled her hips into my incredibly hard cock. I heard a gasp and a very faint moan escape her lips as my hand moved up her back and behind her head, then into her soft hair. Suddenly, I heard her clear her throat and felt her push gently on my chest.
“I’m sorry, sir, no passengers are allowed in the galley.”

JB Duvane writes about tortured bad boys with a dark past ranging from hired killers to serial killers, as well as the non-lethal variety of bad boy. She wants everyone to have their HEA.

Open to everyone who shares about Jet-Set Billionaire! Enter for a chance to win a $25.00 Amazon Giftcard The giveaway runs from September 12 - September 30 Don't miss out on this great opportunity! Enter Today!
http://www.rafflecopter.com/rafl/display/b879ac785/
Blog Tour Excerpt Giveaway JB Duvane